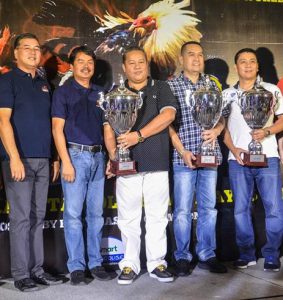 The biggest international cockfighting derby, the 2018 World Slasher Cup, will kick off at the Smart Araneta Coliseum from January 29 to February 7, 2018. The preeminent derby where the world’s best breeders compete with their fiercest bloodlines, next year’s 9-cock invitational is expected to attract foreign combatants as well as local enthusiasts and even returning champions, all for the quest to be hailed victorious in what is reputed to be the toughest gamefowl event in the world.

Known as the “Olympics of Cockfighting,” the 2018 World Slasher Cup (WSC) will be a real smackdown among the finest winged-warriors. WSC 2017 first edition lone champ, Frank Berin, beat hundreds of hopefuls with his NEJ Sebastian entry. Berin was also one of the three last men standing in the WSC 2017 May edition, where his entry, Mulawin, scored a three-way victory along with Escolin Eslabon (owned by brothers Martin and Marlon Escolin), and Lucban (of owner Anthony Lim).