The best breeders battle in the World Slasher Cup 2019 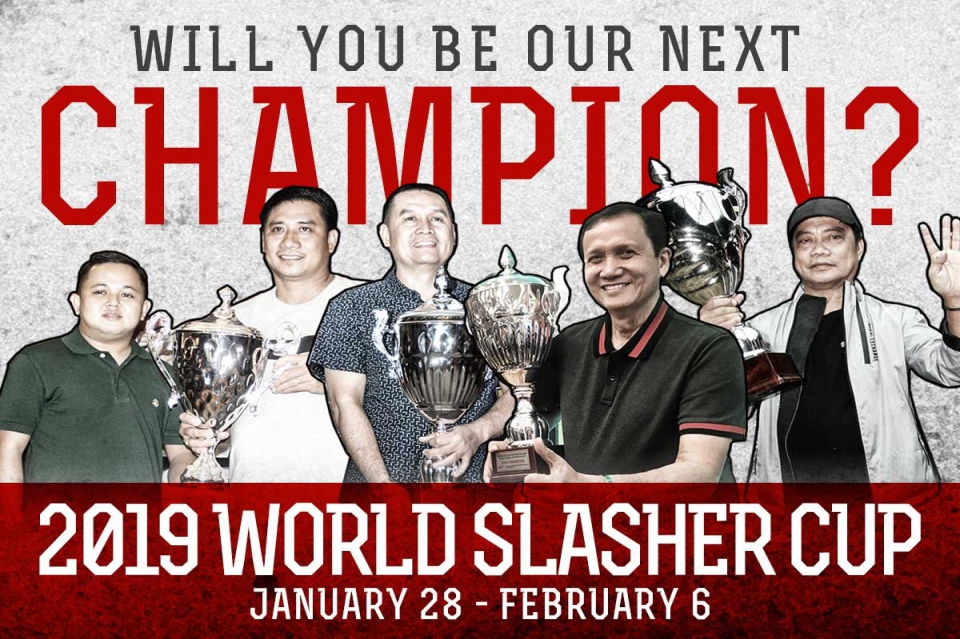 The World Slasher Cup has been dominated by local champs in recent years. Will this year be any different? (L-R) Magno Lim and Gerry Tesorero; Frank Berin; Patrick “Idol” Antonio; Rey Briones
WSC 2019 at the Big Dome will showcase the best breeds and bloodlines in the 9-cock invitational derby

A new breed of fighters is expected to go up against the vets and former champs as the World Slasher Cup 2019 unfolds this month. The much-awaited international derby kicks off on January 28 at the historic Smart Araneta Coliseum. The long bout, which will have its Grand Finals on February 6, 2019, will be the stuff cockfighting legends are made of.

With hundreds of entries already registered, the toughest breeders are just about prepared for their toughest battle yet. Even last year’s WSC 1 champ, Patrick “Idol” Antonio – who bagged his 7th solo WSC win in 2018 – isn’t known to take any chances. He will most likely pit his customary Boston Sweaters from Inguel Ignacio against opponents to hopefully score an 8th WSC title.

Recent champs are also not to be discounted. Frank Berin, media man Rey Briones, the Escolin brothers, and Magno Lim and Gerry Tesorero may look to reclaim their glory.

Foreign participants raring to take the cup away from the crop of local champs that have come to dominate the WSC in recent years. Expected to participate this year are Marty Bently of Ohio; Erik Rosales, Robert Dominquez, Bruce Brown of California; Butch Cambra of Hawaii; Nathan Jumper of Mississippi; Tim Fitzgerald of Utah; Bobby Fairchild of Kentucky; Black Bonanza Brent Douglass and Ernest Atkins of Tennessee.

Those who are interested to join this year’s derby may still register their entries for this gruelling nine-cock invitational derby by calling the WSC Derby Office at 588-8227 or 911-2928; or via the registration page on the website www.worldslashercup.ph.

The first three days of 2-cock Eliminations are from January 28-30. The 3-cock semis begin on January 31 to February 2; and the 4-cock Pre-Finals will be on February 3-4, with the 4-cock Grand Finals on February 6. The number of entries will determine if there will be a one-day break before the Grand Finals.

Known to its numerous followers as the Olympics of Sabong, the World Slasher Cup is a smackdown of only the best breeds and bloodlines of winged warriors meticulously cared for in fowl farms here and abroad. The upcoming derby is also a chance for hundreds of hopefuls to outlast and outshine last year’s WSC 2 solo champ, Greengold Uno, owned by sabong enthusiast and newspaper executive Rey Briones and his farm manager Rod Advincula, whose father also has a long history with WSC.

The World Slasher Cup 2019 is supported by Emperador and Powertrac.

World Slasher Cup 2 will be held from May 22 to May 28 also at the Smart Araneta Coliseum.